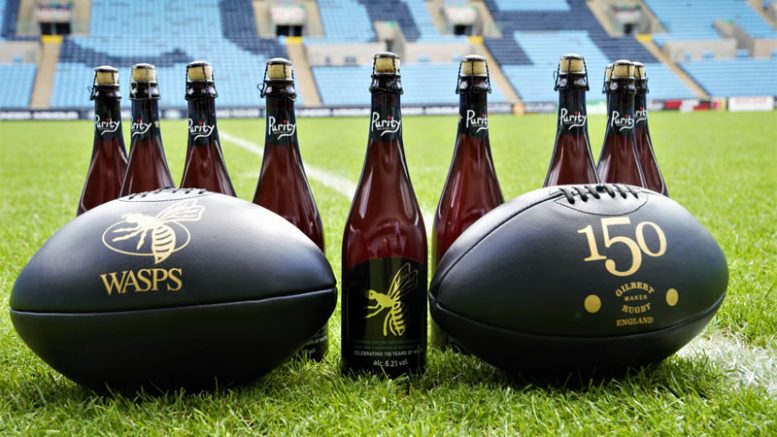 As an official club partner of one of the best known names in world rugby, the award-winning Warwickshire brewery has honoured the club’s major milestone with a strong Rye IPA, aged for 6 months in Bourbon Casks. Only 150 bottles of the beer have been exclusively produced for Wasps Rugby.

The 6.2% limited edition beer is available in 750ml bottles, brewed with champion malts, Maris Otter, Rye, Crystal Rye and Cara malts to create a warming copper orange colour, and hopped with Pilgrim, Chinook, Galaxy and Simcoe to create a lingering floral bitterness.
Brewed with skill, dedication and passion, this honorary beer is the latest addition to a year of celebrations as Wasps Rugby continues to push for the playoffs in the Aviva Premiership and look to a final at Twickenham, the home of English Rugby, and truly make this 150th season one to remember.

Playing their homes games at Coventry’s Ricoh Arena, Wasps’ proud history began in 1867. They have since been crowned European Champions twice and English Champions five times, three of which were in consecutive years (2003, 2004, 2005).

Purity MD, Paul Halsey, said: “All of us at Purity are extremely proud of our partnership with this fantastic rugby club so we’ve poured our hearts and souls into this special beer to mark 150 years of Wasps. By matching their passion on the pitch, I know we’ve created a real crowd pleaser, both for beer fans and rugby lovers the nation over. Here’s to another 150 years of passion and performance, to every last drop!”

Stuart Cain, Commercial Director for Wasps Rugby, comments: “This is a brilliant gesture from our partner and gives our fans something special to drink when we’re hopefully celebrating a place in the play-offs. Purity has helped us deliver a great cask ale experience at the Ricoh Arena and this just demonstrates further how they understand both rugby and what makes our fans tick.”

He added: “It’s ironic that we mark our 150th year with a celebration ale as good beer has been part of our story ever since we started. In fact, legend has it Wasps would have been a founder member of the RFU in 1871 if our representative hadn’t visited the wrong pub. It was only after a few drinks that he realised the error of his ways and was too late to attend the meeting!”

2019 Charity Pub of the year awards