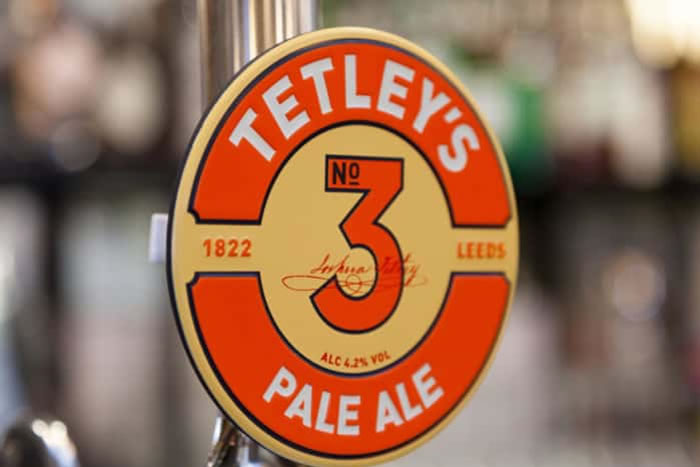 Tetley’s beer is being brewed in Leeds again after a break of more than six years.

Tetley’s No3 Pale Ale is being exclusively brewed in its original heartland, by the team at Leeds Brewery, in partnership with Tetley’s brew masters. The recipe for this pale ale has been inspired by the original recipe for Pale Ale which was initially brewed 150 years ago in 1868, and plucked from Tetley’s extensive beer archive spanning over 200 years.

Giving drinkers a unique taste of the 19th century, Tetley’s No3 Pale Ale (4.2% ABV) features a logo inspired by its original logo created in 1800’s and is unusual for a pale ale by modern standards as it uses entirely English hops to create a full flavoured, crisp and refreshing beer. English Pale Ale malt is used to provide body and colour and a mixture of Pilgrim, Brewers Gold and Goldings hops provide bitterness and aroma – giving a surprisingly modern taste that today’s drinkers will enjoy. Pulling this combination together is Tetley’s unique double yeast strain which creates the brand’s distinctive, timeless taste and balances well with the recipes hop character.

Emily Hudson, Brand Manager for Tetley’s commented: “We are thrilled to be re-invigorating such an amazing brand – with its almost 200-year-old brewing heritage. It was one of the most innovative beer brands of its day from brewing with a distinctive double yeast strain, to the brand’s invention of stainless steel Yorkshire squares (versus stone or slate). No3 Pale Ale and Tetley’s new visual identity marks the start of an exciting new chapter for the brand.
“As one of Britain’s oldest and best loved ales, we recognise the affection and support for Tetley’s that still lives on across the country, particularly in Yorkshire and the brand’s home city of Leeds. With this in mind, we felt it was a fantastic opportunity to team up with Leeds Brewery – one of the region’s leading brewers – to recreate the recipe within a mile of where it would have originally been brewed 150 years ago.”

Of the project, the founder of Leeds Brewery Sam Moss said: “As passionate brewers, when we were approached with the opportunity of attempting to create a beer inspired by a 150-year-old recipe from the Tetley archives in Leeds, it was a challenge that our brew team were delighted to accept. It’s been an exciting process and we’re thrilled not only with the quality and flavour of the beer, but also with how faithful we’ve managed to remain to the original recipe.”

In addition to the new recipe, in looking to the future of Tetley’s; Joshua Tetley & Son has also revisited the brand’s rich brewing heritage, spanning almost two centuries, to inspire a new take on the look and feel of its logo and branding. Working with Leeds based design consultants WPA Pinfold, the new branding is a new interpretation of the Tetley family’s coat of arms, using symbols inspired by their previous business as maltsters and used in the company’s original logo for the first 80 years of its existence.

Tetley’s No3 Pale Ale will be available in cask only, whilst the brand’s new look is already beginning to appear across its entire portfolio and out in trade.